Build an inclusive economy from the ground up

Confront racism in all its forms

Provide quality education in every community

Taxes Matter: Local Tax Policy and Its Impact on Prosperity

Taxes are the investments we make in the building blocks of a modern economy, but we don’t often get an opportunity to talk about the policy behind who pays taxes, how much they pay, and why. On February 25, 2021, the second Future Forum, entitled Taxes Matter: Local Tax Policy and Its Impact on Prosperity, explored the considerations that local government officials face when evaluating whether raising new revenues to provide additional services is the right path forward. Of course, spending more money is not always the way to deliver better results for residents, in fact it should not be the first option we consider. Local leaders must constantly prioritize spending, maximize efficiency, and cut waste before raising taxes. However, when it becomes clear that more money is necessary, then local leaders face choices and challenges.

Watch the full video of this Future Forum here.

Challenges that Local Leaders Face When New Revenues Are Needed

We pay taxes to make investments in the building blocks of a modern economy, things like education, healthcare, public water and sewer systems, roads, public transportation, or the courts and emergency responders. These are things that make a modern society possible and ensure a good quality of life for the communities that have them.

Politicians are often reluctant to talk about taxes. Advisors will say that taxes are a losing issue unless you’re talking about capping or cutting them.

Anne Arundel County context: In Anne Arundel County, leaders of both parties say that things like the county’s property tax cap are “bad policy, but good politics.” During the 2018 campaign, some Anne Arundel County politicians who were running for office signed a “no new tax pledge,” even though it is impossible to tell from the campaign trail what the budget picture will be like in coming years.

Like any business or nonprofit, government sometimes needs additional revenue to fund the services and infrastructure that the public demands. If that’s the case, local leaders need a way to have serious and honest conversations with residents about why revenue is needed, how it will be spent, and how it will be raised.

The Future Matters team went out into the community to get the perspective of a few regular people on the topic of taxes. See the results below.

During the forum, the Future Matters team also polled the audience to test whether they agreed or disagreed with statements about tax policy.

During the middle of the 20th century, a period of time when the middle class grew and much of the infrastructure of the U.S. was built, the top earners paid much higher tax rates than they do today, with the top bracket paying over 70%.

As we approached the 1980s, the U.S. entered a period of reaction, and tax revolts were accompanied by the rise of supply-side, or “trickle-down” economic theories, pushed by Nobel Laureate Milton Friedman and the Chicago School of Economics.

The basic idea of these theories is that tax cuts, especially for corporations and top earners, would grow the economy and create jobs, while tax increases to pay for government services would hurt job and economic growth, or could cause corporations and the wealthy to take steps to avoid paying those new, higher taxes.

However, Benjamin Orr says that “money is a gas, not a liquid”; it doesn’t trickle down, instead it rises from the bottom to the top.

Consider the Kansas Tax Cut Experiment. In 2012, then Kansas Governor Sam Brownback and a conservative state legislature instituted a massive tax cut both on businesses and individuals based on supply-side economic theory. Governor Brownback predicted that these cuts would lead to accelerating economic growth and ultimately 23,000 new jobs by 2020. Instead, Kansas’ economic growth lagged behind neighboring states and spending was slashed on the basic building blocks of the modern economy, like education and infrastructure.

As a result, the same conservative legislature ultimately voted to roll back the tax cuts. The tax cut experiment had decimated the Kansas’ economy.

During the COVID-19 pandemic, we’ve seen that the worst economic impacts are affecting lower wage earners who are losing their jobs or having their hours and wages cut, while higher income persons are able to continue working from home. The lowest quarter of earners are eight times more likely to have lost their jobs than the highest quarter.

In absolute terms, wealthy individuals usually pay more in taxes, whether you are looking at the federal, state, or local level. However, in proportionate or relative terms, such as when considering a percentage of overall income, high earners are often paying less.

For example, the local income tax in Maryland is a “flat” tax, or a proportionate tax, where everyone pays the same percentage of income, regardless of how much taxable income they have.

Many sales or excise taxes (like the gas tax) are actually regressive, with lower income people paying a higher percentage of their overall income than higher income people.

When we look at the data, we find that Maryland has an “upside-down” tax system, where the top 1% pay less in state and local taxes as a percentage of their overall income than all of the other tax brackets. Source: Maryland: Who Pays?, a report from the Institute on Taxation and Economic Policy. 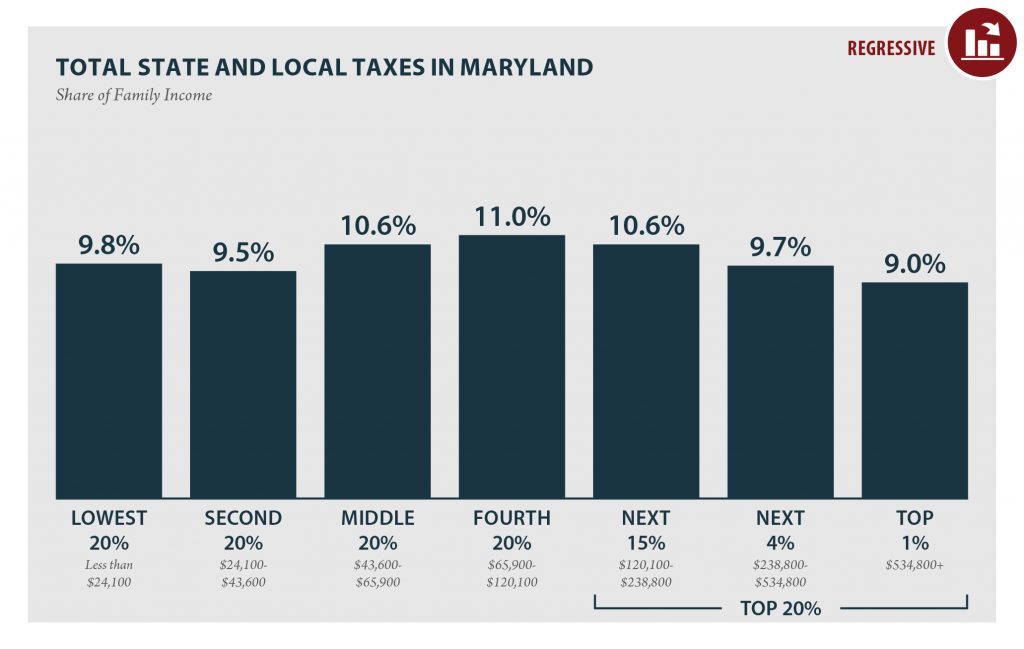 During the Taxes Matter forum, the Future Matters team tested a number of statements about the impact of tax rates on location decisions by businesses or high earners.

It’s important to know what the data says about the impact on location decisions, or other steps the wealthy might take to avoid taxes when they are increased, because this is a commonly heard argument for maintaining Maryland’s upside-down tax code.

In fact, the data indicates that overall, businesses and individuals do not make location decisions based on taxes. Their decisions are based on factors like amenities, public school quality, overall quality of life, or access to important markets or resources.

Legislative Efforts in Annapolis: The Local Tax Relief for Working Families Act of 2021 and the Fair Funding Coalition

As was mentioned above, Maryland’s local income taxes went from progressive to flat in 1999. A bill proposed last year by County Executive Pittman and introduced this year by Delegate Julie Palakovich-Carr and Senator Jim Rosapape, would enable local jurisdictions to establish progressive tax brackets, allowing counties to raise taxes on higher income earners and lower them on the majority. This legislation is called the Local Tax Relief for Working Families Act of 2021, filed as HB319 in the House, and SB133 in the Senate. It has the support of the bipartisan Maryland Association of Counties.

Delegate Palakovich Carr is also working with a group of legislators and advocates called the Maryland Fair Funding Coalition to pass the Fair Tax Plan, which is a set of policies that would make Maryland’s state and local tax code more progressive and ultimately help to end the upside down tax code.

How can local leaders have better conversations about taxes?

No one wants to pay any more in taxes than they have to, and most of us are familiar with the feeling that we’re not getting value back for the taxes that we pay.

The challenge for local leaders is to find a way to raise revenue that earns the support of the community while also ensuring that the tax code doesn’t cause a disproportionately negative impact to anyone.

People need to see the connection between what they are paying in taxes and what they are getting back in terms of the building blocks of the modern economy, or specific programs that make their lives better.

Transparency and performance metrics in financial matters are essential, particularly when governments provide tax credits to individuals and businesses. Too often “corporate welfare” is spread to companies that make political contributions, but taxpayers don’t get reports on job creation or other public benefits. The Maryland Finance Tracker is a tool that allows taxpayers to monitor that activity. It was created by legislation introduced by Delegate Julie Palakovich-Carr in 2020.

Many other types of taxes are currently either regressive or proportional, and there might be ways to make them more progressive.

For example, County Executive Pittman is considering funding affordable and workforce housing with a real estate transfer tax increase only on transactions over $1,000,000.

Best Practice #2: Government spending must be transparent, and data about spending decisions must be easily accessible.

Information about how local leaders are spending tax dollars should be easily accessible through an online database.

Best Practice #3: Leaders should make the case for why new revenues are necessary and build consensus.

Budget town halls are a great way to do this, as well as specific outreach to communities when new taxes are needed.

Open data portals and other measures that make data transparent and accessible are also key.

Best Practice #4: Leaders should understand what the research data and public interest polling say and give consideration to that data when making decisions.

When County Executive Baker raised taxes to fund education, he found that public support for the tax increase outpaced the courage or willingness of elected officials to implement a tax increase.

Local leaders should also look for data on the potential impacts of tax policy. The myth of millionaire tax flight, for example, has been repeatedly debunked, but often scares politicians away from the place where money has accumulated, at the top of the economic scale, when public projects need revenue.

Best Practice #5: Collect performance data, use it to make decisions, and make that data publicly available.

Tax credits and other incentives can be considered to be a kind of “shadow budget.” In other words, they represent government spending that is rarely monitored for public benefit.

When considering a tax credit or other incentives, a good first step is to make sure to collect the data that will allow for the performance of that incentive to be evaluated. For example, when a business receives a tax credit, is it creating the jobs or making the investments that were expected when the tax cut was issued?

Maryland Center on Economic Policy, the organization that Benjamin Orr founded and currently leads, providing research and policy analysis on a variety of topics including tax policy.

Fair Funding Coalition, a coalition working in Annapolis on the Fair Tax Plan, which is multiple proposals that create a more fair tax code in Maryland.

Who Pays? The Cost of Kansas’ Tax Cuts for Local Communities. Kansas Center for Economic Growth.

State Taxes Have a Negligible Impact on Americans’ Interstate Moves. Center for Budget and Policy Priorities.

The Myth of the Millionaire Tax Flight, by Cristobal Young. Available here.

A Conversation with Mehrsa Baradaran, the author of “The Color of Money: Black Banks and the Racial Wealth Gap.” This discussion is a partnership between the Baker Strategy Group and the University of Maryland’s School of Public Policy. It will be held March 10, 2021 from 7:00pm-8:30pm. Registration is now closed.